“Albany, Give rent regulations back to NYC.”

That’s the message from Elected Officials and Tenant Advocates at an affordable housing rally at City Hall on Tuesday. They want the 1971 Urstadt Law, which gave control of the City’s rent regulations to Albany, repealed and control returned to New York City.

Tenant Activists said New Yorkers shouldn’t have to give up food or medicine to pay their rent. They shouldn’t have to worry about being forced out of their apartments. They want a rent roll-back or at least a rent freeze and are calling 2015 “The Year of the Tenant.” …More

He now has a new set of charges in connection with a June incident that has left a woman hospitalizedThe homre of record of the dwelling units is generally not known.prada glasses

The US and its European and Gulf allies are increasingly concerned about the rising prominence of Islamists among the rebels, who have played a major role in the civil war against President Bashar al Assad’s forces.mcm backpack
Blasts hit railway tracks in Hyderabad

Did you know that 80 percent of poor renters in rent-regulated apartments pay rent that is more than 50 percent of their income, up from 64 percent in 2005?* Statistics like these illustrate the pressing need to address the issues surrounding affordable housing and renters’ rights. In the August 3 episode of “Represent NYC,” State…

Over in Prospect-Lefferts Gardens, a group of protestors led by the Alliance for Tenant Power recently staged a rally against 626 Flatbush Avenue, a luxury high-rise currently taking shape near Prospect Park. The event was held in part to protest the ever-controversial 421-a tax abatement program, which developer Hudson Companies falls under. According to Gothamist,…

With only 11 days until the 2014 general election, political junkies are watching the battle for the New York State Senate closely to see which party will control the chamber. But for tenants and housing advocates, this coming election is only the starting point: the real date to watch is June 15, 2015, the day…

The Associated Press on June 23, 2014 – 9:25 PM NEW YORK (AP) — New York City tenants in nearly a million regulated apartments will be digging deeper into their pockets. The Rent Guidelines Board on Monday voted 5-4 to raise rents on stabilized apartments by 1 percent on one-year leases and 2.75 percent on…

Thursday, August 21, 2014 By Janet Babin : Economic Development Reporter, WNYC News Mayor Bill de Blasio set an ambitious affordable housing agenda, promising the city he would build or preserve 200,000 units of affordable housing over the next decade. The administration has made clear that a majority of those units will come from preserving… 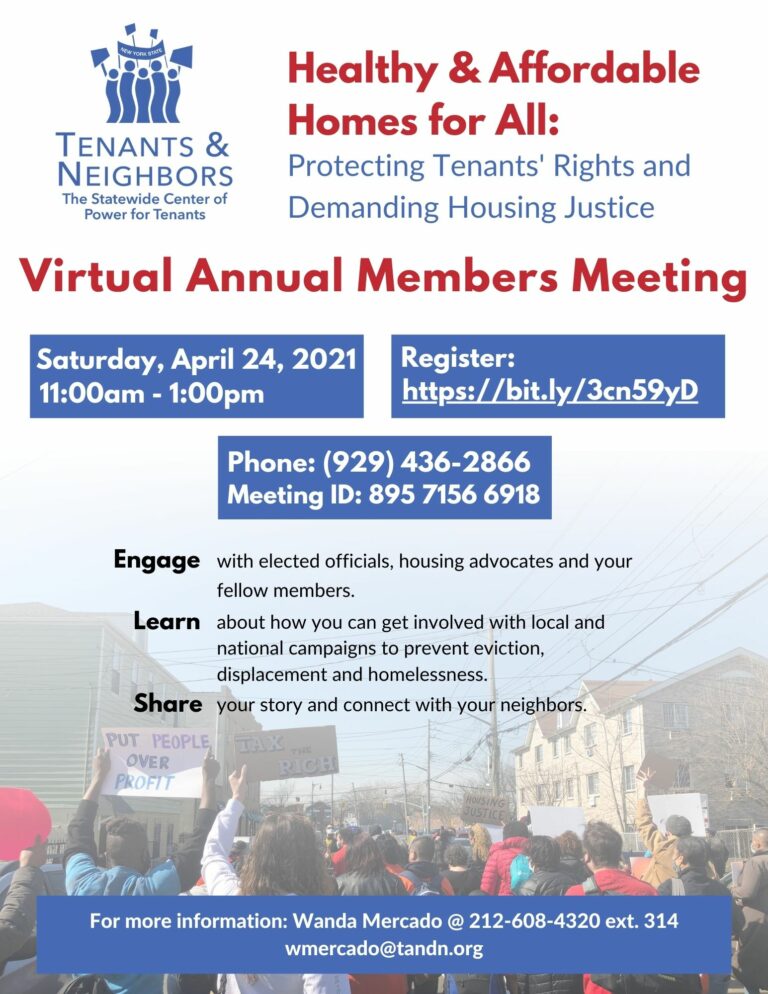 While this year has been extremely challenging, leaving many out of work and behind on rent, we tirelessly advocated and won an eviction moratorium and rent relief that will help thousands of New Yorkers stay safely in their homes. But there is still a lot of work to do and we have a once-in-a-generation opportunity…